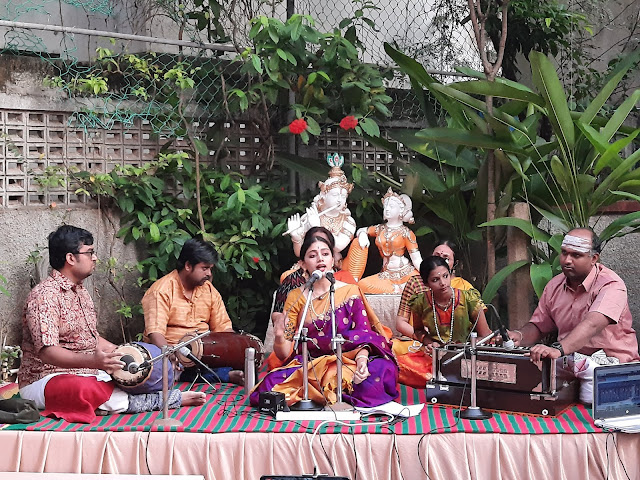 During the 2019 - 2020 Margazhi month, there was one particular video which was going viral on WhatsApp. It was not anything remotely like the ‘Kolaveri’ or ‘Jhimki Kammal’ songs. It was of a young girl called Sivasri, among a group of people going around Mada Veedhi of Kapaleeshwar Temple in Mylapore, singing Namasankeertanam!

Instantly, she became a rage among the Kutchery going crowd. It was evident that the girl had immense talent and was trained in Carnatic Music. Obviously, the sensation was limited to a certain segment of people, for it's meant for those who are interested in this genre. Well, I being one of them, when I heard that she is performing at a private residence, on Feb 8th, I rushed straight from Bangalore into the host’s house, looking tired with disheveled hair and crumpled clothes. My entry, of course got the unintended attention, momentarily distracting everyone from Sivasri.

She started with a Namavalli ‘Narayana Narayana Jai Jai’ and it was evident that it was an evening well begun. Our country has always glorified parents and teachers, therefore in line with that sentiment came Sant Eknath’s Abhang ‘Guru Mata, Guru Pitha’ in Hamsadhwani Ragam. Sivasri herself follows the sentiment of this Abhang, and we saw her mother singing on the stage with her and her father too has a huge role in her progress.

Sivasri chose to sing Pithukuli Murugadas’s composition ‘Cholla Cholla Thithikume’ in Ragam Kamaas. Pithukuli Murugadas was famous for his songs on Muruga and hence his Guru Ramdas gave him this name. A freedom fighter who lost an eye during the Salt Sathyagraha, he was a popular singer.

Sivasri has come from a family which has been strongly steeped in namasankeertanam & singing. She sang a song in Ragamalika written by her paternal grandfather Seerkazhi R.Jayaraman. Is music and this deep involvement with God, a genetic thing? As if to answer my question, Sivasri moved to singing her father Seerkazhi.J.Skandaprasad’s composition ‘Karunarasa Paripooorna’ in Ragam Desh, in the most wonderful way.

Sivasri is not only a competent singer, but also a confident performer with an extremely expressive personality, which could be an asset since age is in her favour and she being a Bharatnatyam dancer.

She has the intelligence to strike a balance between the Namasankeertanam style & Kutcheri style. For example, she sang a Virutham from Meenakshi stotram followed by Papanasam Sivan’s ‘Devi Neeye Thunai’ in Ragam Keeravani. It was a well thought out Virutham which was appropriate for a song which was based on Goddess Meenakshi of Madurai. Such maturity must have come with the guidance of her teacher and father, who have a pivotal role to play in her life. I guess, years will display the same maturity when hopefully she will be her own person.

Her next choice was a composition of Bhadrachalam Ramadas, ‘Janaki Ramana’ in Ragam Sri. This was ably delivered, though what followed as a Purandaradasa’s krithi ‘Jagadhodharana’ in Ragam Dhanakaapi, had its shortcomings in the diction and the doubtful lyrics. Probably my childhood music lessons in Bangalore under a well known Kannada teacher is making my mind accept only what I was used to listening & singing.

Much appreciation for the meticulous song list planning by Sivasri or whoever planned it for her. They had included Bhadrachalam Ramdas from Andhra, Eknath from Maharashtra, Purandaradasa from Karnataka, Swathi Tirunal from Kerala, Papanasam Sivan and few more from Tamilnadu. Indeed a National Integration Programme!!

Like it was, ‘Aaye Giridhar’ composed by Swathi Tirunal in Ragam Pooryadhanashree, followed by ‘Maadu Meikkum Kanne’ a popular composition of Oothukkadu Venkatakavi which is basically a folk song.

One more Abhang ‘Pandharicha Raya’ followed in a folk tune. Admittedly, she sang it very beautifully & energetically but before we could recover, it was yet another Abhang,
‘Namacha Bazar‘, composed by Palak Das in Ragam Misra Bilawal. Soon after, it was ‘Santancha Dindi’ a folk song, getting me to wonder if it was primarily an Abhang programme and then the next song almost convinced me.. it was
‘Majhe Maher Pandhari’, an Abhang composed by Sant Eknath in Ragam (should I say Raag and not Ragam) Yamankalyaan. Then comes the most popular Abhang ‘Teertha Vitthala’ by Namdev in Ragam Ahir Bhairav.. Now this was surely an overkill. But it was not over. Here comes another Abhang ! ‘Vrundavani Venu’ composed by Bhanudas in Ragam Bhimpalas.

No doubt, Abhangs are now almost as mandatory in a Namasankeertanam or a Carnatic concert, as much as cake cutting on birthdays or even Paneer Butter Masala in any dinner but it could be in decent proportion. I have not heard any Hindustani Concert where a Kavadi Chindu or Tirupugazh being sung, have you??

(*The views and opinions expressed herein are those of the author and not necessarily those of Music of Madras.)

at February 28, 2020
Email ThisBlogThis!Share to TwitterShare to FacebookShare to Pinterest

Malare Mounama ?   It was a humid Friday afternoon on September 25th, when my maid tells me that she is not coming to work for the next fe...