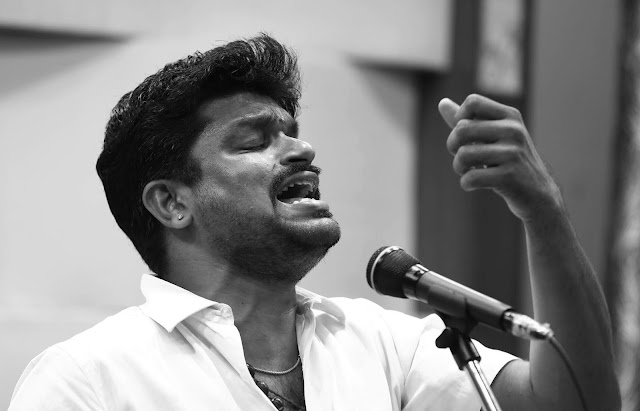 Years ago, when I heard that there was this young person called Kunnakudi M.Balamuralikrishna who had entered the Carnatic Music arena, I felt it was an interesting hybrid name and wondered if he had any connection to either Dr.M.Balamuralikrishna or Kunnakudi Vaidyanathan. I did the most obvious which is turning to Google and found that he was not related to either of them. Somehow, I have never had an opportunity to sit through a whole concert of his, though I have been observing his steady growth. This year I heard him at the Music Academy at the coveted 6.45 slot. There was an impressive crowd and he started the concert with a rarely sung varnam ‘Intha Kopamelara O’Rama’ which was a Ragamalika composed by Veena Kuppaiyer set in Adi thalam. He sang 9 Ragams if I had counted right ! The Ragams were Natai, Gowla, Varali, Arabhi, Sri, Narayanagowla, Reetigowla, Nataikurinji and Kedaram ... Poruma?.....making this the richest of the rich varnamsAfter that thunderous beginning, he decided to calm the excited crowd with a Andal Thirupaavai in Arabhi ‘Ongi Ulagalantha’. He essayed this so beautifully that I am sure Andal Nachiyar and Sri Ranganatha Swamy were as pleased as the audience. His main piece was what people were sitting there for because this is where he has an opportunity to show his strength & prowess in singing and this is where he gets to display his talent, skill and depth of knowledge. By whichever yardstick it maybe he was not only flawless but he made everyone’s hair stand up and left them wondering what hit them. Remarkable energy combined with sound knowledge, it was as if he was possessed and gave it all from the bottom of his heart ! I just realised that I haven’t even mentioned the song and only have been gushing praises. Well that was the impact ! Coming to the song it was a Saint Thyagaraja’s composition in Ragam Reetigowla ‘Seetha Nayaka’ set to Misrachapu Thalam. Usually the song is mentioned followed by how the artiste sang, if it’s reverse in this post then that should explain which takes precedence. This kind of abundant talent had to come from somewhere, so I did some more sleuthing and found out that this amazing musician was distantly related to Kunnakudi Vaidyanathan. No wonder that spontaneity and raw energy while performing was evident. Looks like Google doesn’t know everything after all ....😜The next song for the evening was Muthuswamy Dikshitar’s composition in Ragam Kalyani ‘Kamalamba Bhajare’ and needless to say it was a wonderful rendering. By this time he had the audience completely with him and I wonder if anyone was even looking at their phones or thinking of leaving. What followed was not the common RTP but a STP (in his words). It was Vandemataram as a Shlokam and followed by a mind blowing Thanam and the Pallavi which went as ‘Palinchu Bangaru Kamakshi, Pavani Papashamani’ in Ragam Vasantha Bhairavi set to Chatusra Jampai (Khanda Nadai) thalam. Frankly it did not matter anymore if it was RTP, STP, KTP, BTP or even DTP 😜.... he was simply rocking it !!Whatever he sang we were ready to accept it ..... isn’t that what is a KING in making ?His next song was Patnam Subramani Iyer’s ‘Mariyada Teliyakane’ in Ragam Suruti and set to Rupakam Thalam. This composition is more commonly used as a Javali for Bharatanatyam Dance performances. A Javali is slightly faster than a Padam and usually a theme where a girl is pining for her beloved. He moved in from there to sing the mandatory Tamil song in Ragam Hindustani Gandhari ‘Thamarai Pootha Thadagamadi’ composed by Trichy G. Thyagarajan set to Adi Thalam. If I go on to say how he sang and line up adjectives, this post will take longer to finish ! He ended the concert with a brilliant Thillana in Ragam Pahadi set to Misra Chapu Thalam which was composed by the brilliant violinist Lalgudi G. Jayaraman. I still can’t understand how Lalgudi Jayaraman never got the much spoken about Sangita Kalanidhi. Having said all this, the field of Carnatic Music is very dynamic and one needs to have consistency & perseverance to make an ascent to the top or atleast remain where they are !

(*The views and opinions expressed herein are those of the author and not necessarily those of Music of Madras.)
at December 24, 2019
Email ThisBlogThis!Share to TwitterShare to FacebookShare to Pinterest

Sakhiye Snehithiye All dance occurs in the three dimensions of space and the fourth of time — but it can be a beautiful experience...